Mongolia – the Land of Blue Skies 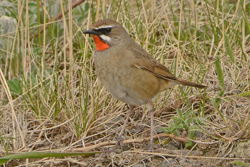 Historically, Mongolia was at its zenith in the 13th Century when Ghenghis Khan unified the nomadic tribes of the steppes of middle Asia and despatched marauding armies in all directions to conquer an Empire that stretched the width of the continent and beyond, from the shores of the Sea of Japan as far west as parts of Central Europe. The lands ruled by the Mongols formed the largest continuous Empire the world has ever known. Today’s Mongolia is as far away from such all-powerful dominance of Asia as it is in time. With a population of 3.2 million, almost half of whom live in the capital, Ulaanbaatar, and a land area of over 600,000 sq. miles, Mongolia is one of the least populated countries on Earth. Away from the big cities, almost 40% of the population live on the country’s vast steppes, leading a nomadic existence that has remained virtually unchanged for centuries.
Although from a geographical perspective Mongolia is synonymous with desert – the Gobi Desert is the fifth largest in the world – it offers a wide range of habitat types. Immediately to the north of the Gobi stretch enormous areas of steppe along with the imposing Altai Mountains. The Siberian taiga reaches south into Mongolia in a picturesque setting of mountains and valleys clothed in boreal forest. Such varied habitats, along with a clutch of wetlands, present a diverse picture, much of which will be unfamiliar. 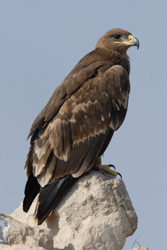 Our tour has been organised to include all habitat types, to give us the best chances of seeing as wide a range of species as possible. In the taiga, Chinese Bush Warbler, Siberian Rubythroat, Red-flanked Bluetail and Pine Bunting await, while the wide-open steppes offer Demoiselle Crane, Steppe and Golden Eagles, Upland Buzzard. Oriental Plover, Saker and Amur Falcons and Mongolian Lark, and, of course, Przewalski’s Horse. Two days in the Altai Mountains provide a real challenge in the form of Altai Snowcock, although Bearded and Himalayan Vultures, Wallcreeper, Mongolian Accentor, Red-tailed (Isabelline) Shrike, Beautiful Rosefinch and Godlewski’s Buntings should not be so demanding. Finally, we visit the Gobi Desert where Pallas’s Sandgrouse, Mongolian Ground Jay, Asian Desert Warbler and Saxaul Sparrow are among the prizes to be won.
Accommodation is in western style hotels in Ulaanbaatar and Dalanzadgad and in permanent tourist ger camps elsewhere, where toilet and shower facilities are in separate blocks.

Day 2: Morning arrival at Chinghis Khaan International Airport and transfer to Gorkhi-Terelj NP (a drive of one to two hours (60 km) on paved roads) located in the southern tip of the Siberian taiga in a region of forested mountains and valleys. After checking in at our tourist ger camp, the afternoon will be spent exploring the immediate vicinity of the campsite searching for such species as Chinese Bush and Yellow-browed Warblers, Siberian Rubythroat, Taiga Flycatcher, Common Rosefinch and Pine Bunting.
Overnight – Tumen Khan Tourist Ger Camp 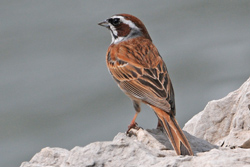 A drive of two to three hours on paved roads will take us west to Khustai NP, the re-introduction site of the iconic Przewalski’s Horse. The park holds a wonderful spread of raptors that includes Himalayan and Cinereous (Eurasian Black) Vultures, Golden and Steppe Eagles and Saker and Amur Falcons.
Among the passerines, Red-tailed and Brown Shrikes, Mongolian Lark and Meadow Bunting could be found.
Overnight – Khustai Tourist Ger Camp

Days 5 & 6: Ugii Lake
A journey of some 240 km on paved roads brings us to Ugii Lake. Set in the ‘never-ending’ steppe, such is the importance of this lake for wetland bird species that it has been designated a Ramsar Site of International Importance. This huge, shallow lake covers some 27 sq, km and its shoreline and adjacent pools will be the focus of our attention for the next two days. Among a range of familiar wildfowl and waders, both Ruddy Shelduck and Red-crested Pochard are to be found, while Swan Geese occur in their thousands. Notable passerines include Rock Sparrow, Small Snowfinch, Citrine Wagtail and Pallas’s Bunting. High among our target species will be Pallas’s Fish Eagle and Relict Gull.
Overnights – Ugii Nuur Tourist Ger Camp

Day 7: Kharkhorin
It is just a short distance (approx. 60 km) to Kharkhorin (otherwise known as the legendary Karakorum, the ancient capital of Mongolia) and although it has been destroyed more than once over the years, the old monastery, Erdene Zuu, remains and there is a very informative museum there. There will be an opportunity to visit the cultural attractions of this historic town for those who wish. The habitat surrounding our camp is dominated by sea buckthorn and holds some interesting passerines, including Mongolian Lark, Taiga Flycatcher, Blyth’s Pipit and Pallas’s Bunting.
Overnight – Anja Eco Tourist Ger Camp

Day 8: Khugnu-Tarna National Park
Today, a two- to three-hour drive of some 90 km on paved roads brings us to Khugnu-Tarna NP, a reserve with varied habitat ranging from sand dunes to wetlands to rocky mountains. Scenically, it is very special. The wetland, in particular, is notable for its considerable variety of Eastern Palearctic specialities, just a few of which are Bar-headed and Swan Geese, Eastern Spot-billed Duck, Eastern Marsh Harrier, White-naped and Demoiselle Cranes, Asian Dowitcher, Pallas’s Grasshopper and Oriental Reed Warblers and Eastern Yellow Wagtail.
Overnight – Khugnu Khan Tourist Ger Camp

Days 10 & 11: Gobi Desert Mountains
Following a short (one hour) early morning flight from Chiggis Khaan International Airport to Dalanzadgad, the capital of Umnugobi province, we shall be met and transferred to our tourist ger camp situated near the beautiful mountain gorge of Yolyn Am. Lunch at the camp should prepare us for some light walking in and around the gorge which is home to Chukar, Bearded and Himalayan Vultures, Saker Falcon. Red-tailed Shrike, Sulphur-bellied Warbler, Wallcreeper, Mountain Accentor, (White-winged) Snowfinch, Beautiful and Common Rosefinches, Mongolian Finch and Godlewski’s and Grey-necked Buntings. If we are really fortunate, we will enjoy sight of the magnificent Altai Snowcock. Mammals are represented by Siberian Ibex, Mongolian Pika and possibly even Argali Wild Sheep.
On the second morning we shall repeat the previous day’s exploration of Yolyn Am before moving on to the ‘ice valley’ of Mukhar Shiveert and then north of camp to look for Oriental Plover.
Overnights – Khan Bogd Tourist Ger Camp

Days 12 & 13: Khongoryn Els
A day will be spent driving both paved and dirt roads to cover the 150 km to the ‘Singing Sands’ of Khongoryn Els. Situated in the extreme south of the Gobi Desert, Khongoryn Els forms a massive range of dunes some 80 m high, up to 12 km wide and at least 100 km in length. The ‘singing’ phenomenon is a product of moving particles of sand caused by the wind or ‘mini-avalanches’.
Any water in this region acts as a magnet to birds and one permanent spring we shall visit can attract thousands of Pallas’s Sandgrouse, while nearby vegetation is a nesting site for Red-tailed Shrike. Long-legged Buzzard and Desert Wheatear are possible en route and an eye needs to kept out for the elegant Goitered Gazelle. The hot bare ground is favoured by reptiles and the Tuva Toad-headed Agama and Mongolian Racerunner are two lizards that are widespread. Away from the dunes, we will visit saxaul forest for Saxaul Sparrow, Great Grey and Red-tailed Shrikes, Crested Lark and Desert Wheatear, while a small wetland should produce more Pallas’s Sandgrouse, Demoiselle Crane, Kentish Plover and Whiskered Tern. After lunch is a time to relax around camp away from the not inconsiderable heat before venturing out in the late evening to search for the small nocturnal mammals of the desert such as Long-eared Jerboa and Long-eared Hedgehog.
Overnights – Gobi Erdene Tourist Ger Camp

Day 14: Dalanzadgad
After an early breakfast, we shall set off on an all-day drive of c180 km on both dirt and paved roads to Dalanzadgad. During the course of the morning, we shall pause for a couple of hours at a bushy location known for its resident Henderson’s Ground Jays. Asian Desert Warbler is also present here.
Overnight – Khan Uul Hotel, Dalanzadgad

Day 15: Ulaanbaatar
Morning return flight from Dalanzadgad and transfer to hotel in Ulaanbaatar.
Arrangements will be made for optional shopping and city tour. Birding in the woodlands of the Tuur River valley could produce such gems as Ruddy Shelduck, Azure-winged Magpie, White-crowned Penduline Tit, Azure Tit and Long-tailed Rosefinch. Celebratory farewell dinner in a city restaurant.