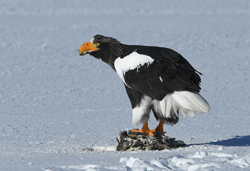 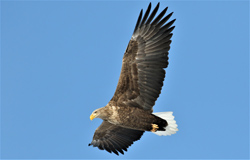 A visit to Japan should be top priority for all birdwatchers. This unique Asian Country of amazing culture and a land of thousands of Islands, is a birdwatcher’s and wildlife photographer’s dream. Japan has a superb avifauna, including a range of much sought after endemic species and in winter the country really comes into its own. During this season, Japan is host to a number of awesome avian spectacles, namely around 15,000 Hooded and White-naped Cranes at Arasaki; an amazing concentration on Hokkaido of the enormous Steller’s Sea Eagle and also the superb dancing Red-crowned Cranes. However, this is just a taster, for we have yet to mention Blakiston’s Fish Owl (the World’s largest owl species), Long-billed Plover, Green Pheasant, Japanese Green & Japanese Pygmy Woodpeckers, Crested Kingfisher, Japanese Accentor, Brown Dipper, Bull-headed Shrike, Daurian Jackdaw, Varied Tit, Dusky Thrush, Red-flanked Bluetail and Japanese Grosbeak to mention but a few. There is also a star-studied cast of wildfowl, which includes, Eastern Spot-billed Duck, Falcated Duck, Baikal Teal, Smew, Black Scoter and Whooper Swan. Our tour program includes a pelagic trip, which may reveal Spectacled, Brunnich’s & Pigeon Guillemots, Long-billed & Ancient Murrelets and Rhinoceros Auklet, as well as sea ducks and gulls. 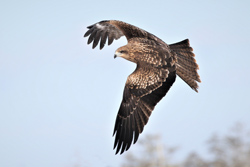 Another amazing feature, is a visit to encounter the Japanese Macaques (“Snow Monkeys”) bathing in the hot springs, an event which offers photographers a wonderful opportunity to capture superb images. Photographic subjects and opportunities are both excellent and seemingly endless. Visiting Japan does require a little sense of adventure for the traveller, to immerse themselves, to a degree, in the culture of the country, by staying in some traditional Japanese-style inns; bathing in hot water springs (Onsens); sleeping on futons and sampling Japanese cuisine. However, accommodations and food for the whole itinerary, are of a high standard and throughout the tour Japan’s demand for order, punctuality, neatness and cleanliness will be very evident.
Japan in Winter – a wildlife and cultural experience of outstanding quality and one not to be missed.

Days 1-2: Fly from UK to Tokyo. After an afternoon arrival we’ll transfer to our airport hotel for dinner and an overnight stay. 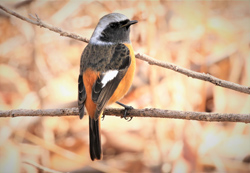 Days 3-4: On day 3 we travel to Kambayashi Onsen. On clear days the snow-capped Japanese Alps and Mount Fuji can be enjoyed. A stop at Lake Suwa could produce a range of duck species, including Smew, Pintail and Eastern Spot-billed Duck. Passerines present include Dusky Thrush, Bull-headed Shrike, Daurian Redstart and White-cheeked Starling. Day 4 is allocated to visit the “Snow Monkeys”, one of the world’s most iconic spectacles. 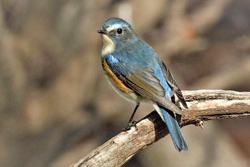 Days 7-9: For this period, we fly via Tokyo to Kagoshima to experience another of Japan’s wildlife spectacles – the winter gathering of around 15,000 Hooded & White-naped Cranes at Arasaki. Several visits will be made to the crane centre to witness this spectacle. At coastal and other locations, we may also see Western Osprey, Kentish Plover, Black-faced Spoonbill, Vega, Slaty-backed & Black-tailed Gulls, Japanese White-eye, Russet Sparrow,
Grey-headed Greenfinch, Masked and Meadow Buntings. 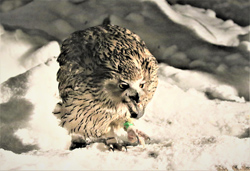 Days 10-15: On Day 10, we fly from Kagoshima via Tokyo to Kushiro on the northern island of Hokkaido for a two centre stay. Here, we have several more wildlife spectacles to enjoy, where even the word superlative falls short of a fair description. The large gathering on snow and ice of the awesome Steller’s Sea Eagle, supported by many White-tailed Eagles is fantastic, not to mention the superb dancing endemic Red-crowned Cranes. Then at our special lodge location we have the world’s largest owl – the spectacular Blakiston’s Fish Owl. A pelagic boat tour and visits to harbours should produce Black Scoter, Harlequin & Long-tailed Ducks, Glaucous-winged Gull, Spectacled & Pigeon Guillemots, Ancient Murrelet and Rhinoceros Auklet.

Days 16-17: Return to Tokyo for a farewell dinner and flying back to UK.