With its amazing contrast of habitats, marvellous scenic locations, exquisite birdlife, friendly people and small size, it is not difficult to see why Costa Rica attracts birdwatchers from all over the world. Costa Rica has a democratic government, no army and the highest literacy level in the region, making it a prosperous and stable country. There is a very positive attitude to national parks and wildlife reserves, with the highest percentage of land area devoted to these, of any country in the world. Rainforests, cloud forests, volcanos, palm-fringed beaches, mangroves and estuaries hold such avian jewels as Scarlet Macaw, Resplendent Quetzal, Rufous Motmot, Sunbittern, American Pygmy Kingfisher, Lanceolated Monklet, Turquoise Cotinga, Northern Royal Flycatcher, Green Honeycreeper, Boat-billed Heron and Magnificent Frigatebird. Costa Rica is a real gem - and in relation to its size, has the highest avian diversity on earth. With all these attributes it is a must for birdwatchers, whatever their level of expertise! Our fabulous itinerary covers the prime sites and venues, including: La Selva, Braulio Carrillo, Cerro de la Muerte, Carara, Guanacaste and Cano Negro Wildlife Refuge – the very best of Costa Rica.

Day 1: Depart UK on a direct flight to San José arriving in the evening. We’ll then transfer to our hotel.
Overnight – San Jose 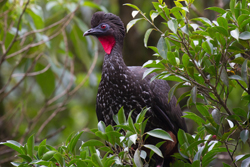 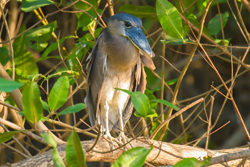 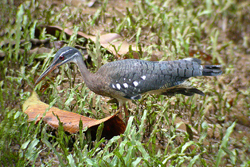 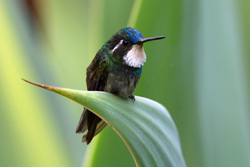 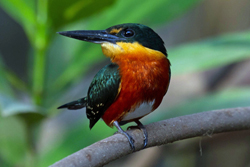 Days 12-14: On Day 12 we’ll head for the Pacific Coast, with emphasis on the wonderful Carara National Park and the Tarcoles Estuary. Carara reserve is an area of Pacific Coast lowland rainforest and is particularly famed for its population of Scarlet Macaws, but there are many more much sought-after species. These include Boat-billed Heron, Lesser Swallow-tailed Swift, Spectacled Owl, Baird’s Trogons Pale-billed Woodpecker, Dot-winged Antwren, Streak-chested Antpitta, Orange-collared Manakin. A boat trip on the Tarcoles Estuary will give us close encounters with herons, waders, terns, Magnificent Frigatebirds and mangrove specialities, such as American Pygmy Kingfisher, Yellow (Mangrove) Warbler, Mangrove Vireo, Panama Flycatcher and Mangrove Hummingbird. We will also have an excursion to the Guanacaste Region. Birds here include Jabiru, Bare-throated Tiger-heron, Double-striped Thick-knee, Lesser Ground-cuckoo, Collared Forest-Falcon and Black-headed Trogon.
Overnights - Villa Lapas, Carara

Days 15 & 16: After more birding in the Carara area during the morning of Day 15, we travel to the airport in San José for our return overnight flight to the UK.