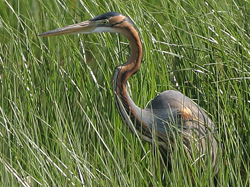 The multitude of migrants which fly southwards down Bulgaria’s Black Sea Coast make this one of Europe’s most attractive autumn destinations. Countless thousands of storks, vultures, harriers, hawks, buzzards and eagles pass through this region in September and therefore our tour is timed to coincide with this migration period. The lakes, reedbeds and woodlands of Burgas offer welcome cover for tired migrants and waves of raptors find the thermals above Kavarna’s dramatic cliffs much to their liking. This migration spectacle is enhanced by a stunning selection of waders in Bulgaria’s extensive wetlands.

Day 1: An afternoon flight to Burgas Airport, where we arrive in the evening. We’ll then transfer 30 km south to the coastal town of Sozopol, where we will be staying for 4 nights.
Overnight - Hotel Kalithea, Sozopol 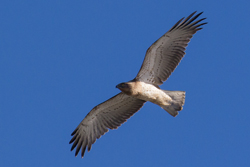 Days 2 & 3: Burgas wetlands: Mandra Lake, Atanasovsko Lake and Burgas Lake, form one of Europe's richest bird areas. One of the biggest attractions of the Burgas wetlands is the flocks of Dalmatian and White Pelicans, stopping for long time there during the migration period. The numbers of soaring birds following the Black Sea coastal flyway in late September is spectacular – large numbers of Black Storks, Booted Eagles, Short-toed Eagles, Lesser Spotted Eagles, Black Kites, Marsh Harriers, Montagu’s Harriers, Common Buzzards (including ‘Steppe’ Buzzards), Red-footed Falcons pass overhead. Late passage White Storks, Honey Buzzards and Levant Sparrowhawks are likely to be seen too. The second half of September is a good time to see the rare Greater Spotted Eagle on migration. Other species of birds likely to be seen at Burgas Wetlands include Purple Heron, Squacco Heron, Little Crake, Black-winged Stilt, Broad-billed & Curlew Sandpipers, Temminck’s & Little Stints, Marsh Sandpiper, Kentish Plover, Slender-billed and Mediterranean Gulls, Gull-billed Tern, White-winged, Black & Whiskered Terns and other migrating wader and waterfowl species. While in this area we will also spend some of the mornings watching the raptor migration at watch points in the Dyulinski Pass in the Eastern Balkan range, which lie to the north of Burgas.
Overnights - Hotel Kalithea, Sozopol

Day 4: We will spend most of the day in Strandzha Mountains, to the south of Burgas, looking for a varietyof forest birds, including White-backed, Grey-headed & Middle Spotted Woodpeckers and also resident and migrating raptors. We will then return to Burgas Wetlands to try to find some of the bird species we may have missed previously.
Overnight - Hotel Kalithea, Sozopol 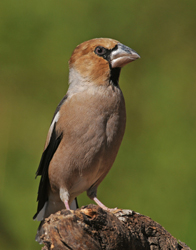 Days 5-7: Pomorie Lake - a salt-pan lagoon, which is one of the best sites for waders and shore-birds at this time of the year. We’ll then explore the Eastern Balkan range, where we will be watching the raptor migration and various forest birds, including Middle Spotted, Lesser Spotted & Black Woodpeckers, Sombre Tit, Hawfinch and Short-toed Treecreeper. For the next three nights we will be staying in in the coastal town of Kavarna. During the two days after arrival we will explore Coastal Dobrudja - the northernmost part of the Bulgarian Black sea coast. The landscape consists of plains, rolling gradually towards the coastal sand dunes and wetlands. Cape Kaliakra is the southern limit of this geographic area, where the last remnants of the Great Steppe, formerly occupied the larger part of the region.
Overnights - Hotel Venera, Kavarna 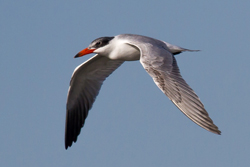 Day 8: Today will be spent in the region of Cape Kaliakra with its cliffs, arid areas and steppes. On the dry, open steppe we should find Stone Curlew, Calandra Lark, Corn Bunting and a range of migrants, including various species of pipits, wheatears and shrikes. The shrubs should produce Red-breasted Flycatchers, Common Redstarts and a good diversity of warblers. In the second half of September there could still be Pied Wheatears and Alpine Swifts around the cliffs, plus late passing Hoopoes, Bee-eaters and Rollers. Various migrating raptors pass overhead all the time, including Short-toed & Booted Eagles, Levant-Sparrow Hawk, Montagu’s Harrier, Pallid Harrier and Red-footed Falcons . Some residents such as Long-legged Buzzard and Eurasian Eagle Owl are also possible. On the sea we will look for the Mediterranean race (ssp. desmarestii) of Shag and various migrating seabirds. On Day 7 we’ll visit the coastal lakes of Shabla and Durankulak. Large numbers of birds are likely to be present here, including Pygmy Cormorant, Ferruginous Duck, Marsh Harrier, Caspian Tern, Whiskered Tern, and Bearded Reedling. In the shallow waters we could encounter shorebirds such as Curlew & Marsh Sandpipers, Kentish & Little Ringed Plover. We will spend the morning birdwatching at Durankulak Lake and the adjacent coast for seabirds, waterfowl and other migrants. In the afternoon we will explore the nearby Shabla lakes to look for more water birds and migrants.
Overnight - Hotel Venera, Kavarna
.
Day 8: Today we will be driving back south to Burgas for our evening return flight to the UK. There will be several stops on the way at different birding sites along the coast.